Hello! I’m Addaberry, one of the editors on Trails to Azure. Today, I’m happy to explain all the details on how you will be able to purchase the base version of Trails to Azure for use with our eventual patch. The journey to this point in time has been long and arduous, so I’m going to give a brief history lesson on versions of this game, and few general notes about the game before explaining our recommended method of acquiring the game.

After Zero no Kiseki’s PSP release in 2010, Falcom contracted the Chinese company Joyoland to port and localize the game over to PC in Chinese. Falcom then took the Chinese port and released it in Japanese. This is the version of Zero you all are likely familiar with. So, when Ao no Kiseki was released, it went through a similar process of being ported from PSP to PC in China. However, it did not make it back to PC for Japan this time. Falcom saw dwindling sales in the Japanese PC market and decided it wasn’t worth bringing back over. To this day, the only PC version of Ao no Kiseki has been locked behind Chinese payment platforms. Until now!

The base version of Azure functions as two separate pieces. First, the game’s files, which are free to download directly from Joyoland’s site at this link. Secondly, the activation license. This has been the source of most of the trouble, and the methods listed below are instructions on how to get a hold of activation keys. For now, we do not recommend you install or attempt to activate the game once you’ve purchased it. The game comes with aggressive DRM that may trip any anti-virus software you have installed.

Yes, you read that correctly. After years of being totally inaccessible to Western fans who don’t have Alipay and a passport, we were able to have our Chinese contact—Pockle7, who is an avid Falcom fan, like us—speak with Joyoland and convince them to implement PayPal support. While I realize that not everyone will be able to use this method due to regional restrictions and whatnot, if you have someone you trust in the community, Joyoland does allow users to gift codes.

You will need to set up an account on Joyoland’s site. If you have reservations about giving out your email, you can get a burner account here. You can navigate through Joyoland’s website to the checkout page, or simply click this link to go straight there. The game currently sells for 60 Yuan, about $8.50 or ‎€7.50. Do keep in mind this price is subject to change, and is entirely Joyoland’s decision. As stated above, we do not recommend installing or activating the game at this time. For additional help purchasing the game, you can follow this visual guide I made.

If you insist on installing the game to confirm your ownership, then you will also have to download the Joyoland platform patch here. Simply unpack this file and drop it into the main game’s directory and overwrite all files Windows asks you to. This updates the game so that it’s compatible with your Joyoland account. When you boot ED_AO.exe, you will be prompted to put in your Joyoland.com login info to verify the game is on your profile. Once you do, the game will start, confirming that you have legally purchased Joyoland’s version of Ao no Kiseki.

This is the only method that the vast majority of you all will be able to use to officially purchase the PC version. From here on I will cover the other methods I uncovered during my research. Consider the rest of this article to be a bonus history lesson/tour through my madness. You may also want to jump down to the very bottom of the article for how else you can support Falcom if you cannot use PayPal or know someone that can.

The studious among you might be thinking, “Well, what about key seller site X or Y?” In my nearly 50 hours of researching all this, only one place other than Joyoland actually has game codes in stock:

This is a Chinese Steam-like platform. I, as someone who can’t read a word of Chinese, have been able to purchase a copy of Azure from here. That said, there are two major barriers that prevent me from wholeheartedly recommending this. First, to even log in, you need access to one of two Chinese social media platforms, QQ or WeChat. I found QQ to be totally inaccessible, requiring a valid Chinese phone number. WeChat was much easier to get into, however, it has the strange requirement of you needing to have your account verified by another member who is already on the platform. So after hunting down someone to verify me—the verifier must also meet a list of requirements, such as having been one for at least one month—I was finally able to get into the store proper.

I chose to do this on their standalone client rather than their website. Payment is also done through whichever method you used to log in, so, in my case, WeChat. After trying to buy the game with three different credit cards over close to ten different occasions, I was finally able to use a burner card with the Privacy App to actually buy the game. Out of excitement, I tried to buy Zero with it as well, and it didn’t work. I have not been able to buy anything on WeGame since. 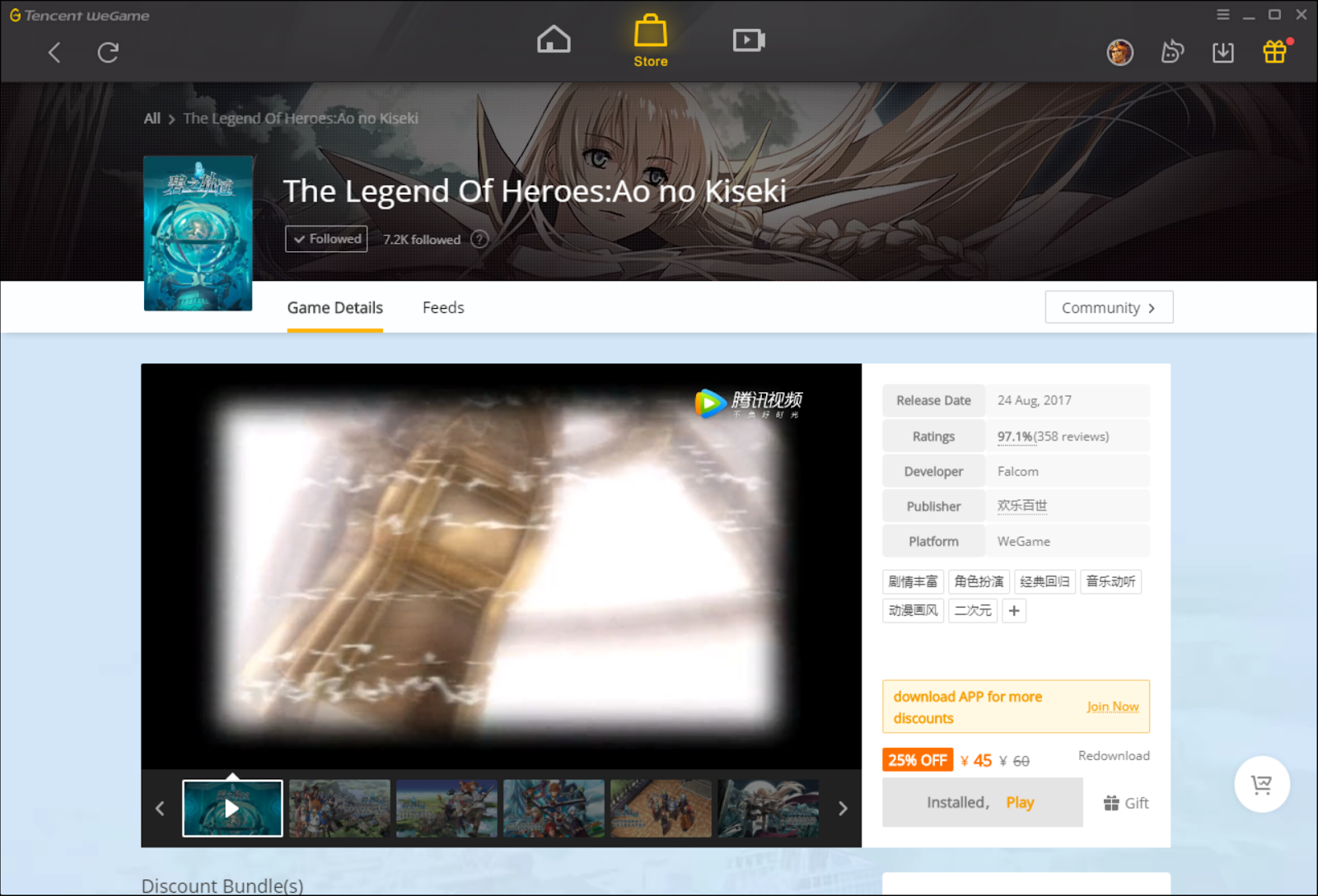 So, now, I finally have the game. Unfortunately, this leads to the second barrier I alluded to earlier: DRM. The game is launched through the WeGame client, which is a lot like Steam. So aside from the usual DRM like having to have the client open to play your game, WeGame also does integrity checks of the game files. Modifying the game’s files leads to crashing, or the client refusing to play the game. Since the goal of this from the outset was to find a version to patch, this was the final nail in the coffin of this being a viable way of getting the game into peoples’ hands.

Last is the method many probably thought would end up higher on this list:

There are many versions of Ao no Kiseki box sets floating around on Chinese second-hand sites. You can get a detailed breakdown of those at this link. In the time I spent searching around, I found Taobao to be the most accessible site to buy through, but I don’t doubt there are others that are accessible or are easier to work with. For the sake of brevity, I won’t go into all the gritty details of the purchasing process. If you really want to do this method, then googling some Taobao guides will do you well, and will guide you through the process of setting up an Alipay account. In my case, the shipping costs from mainland China to the central United States ended up over $50. So between limited stock and outrageous prices, I would only recommend this to the superfans among you.

So ends our journey for today. For those who read this whole thing, thank you for humoring me. I had to leave out quite a bit, but I think you all probably had more than enough of this for one day. For those who jumped down here from the earlier section, if you can’t purchase the game from Joyoland’s website or have someone who can gift you a key, there are a few ways to still support Falcom directly. Although these versions won’t be compatible with our patch, you can purchase a PSP copy from Amazon or PS4 copy from Falcom’s shop, or digitally on Japanese PSN. You could also gift a friend a Falcom game on Steam or buy the digital version of Ao no Kiseki’s official soundtrack from Amazon. That said, I highly recommend buying the game through Joyoland if you are able. Doing so shows Falcom the demand for this game on PC, and rewards Joyoland for being kind enough to work with us to bring you all this experience. That’s all from me for today. I look forward to talking to you again when it’s time to get over the barrier once more!

62 Replies to “Trails to Azure: Now Available to Purchase Via PayPal on Joyoland’s Website!”

This site uses Akismet to reduce spam. Learn how your comment data is processed.

Ys vs Trails in the Sky Opening

Ys vs Trails in the Sky Screenshots

Please check back soon for announcements of new projects!